I know, you’re already thinking, “eww, mall food”, but hear me out. Or at least wait to see the photos. Deal?

Mall food has come a long way, hasn’t it? At least it has in our local shopping areas. Oh, you’ve still got your Americanized Asian food and your ever present fast food, but now we’ve also got lobster rolls and gourmet burgers. And that’s just the food court.

Still one of our favorite places to eat at the mall has always been the cafe at Nordstrom (called Bazille at our location), so when they remodeled recently and added Raam, an Asian restaurant, in the middle of the store, I was intrigued. Then I caught a peek at the menu – Char Sui Beef Ramen? Red Chile Pork Steamed Buns? It’s a small menu, but it was interestingly Asian-fusiony enough to get me to try them out. If it’s just mixing cuisines from different Asian cultures is it still considered fusion? Whatever. I ate there. 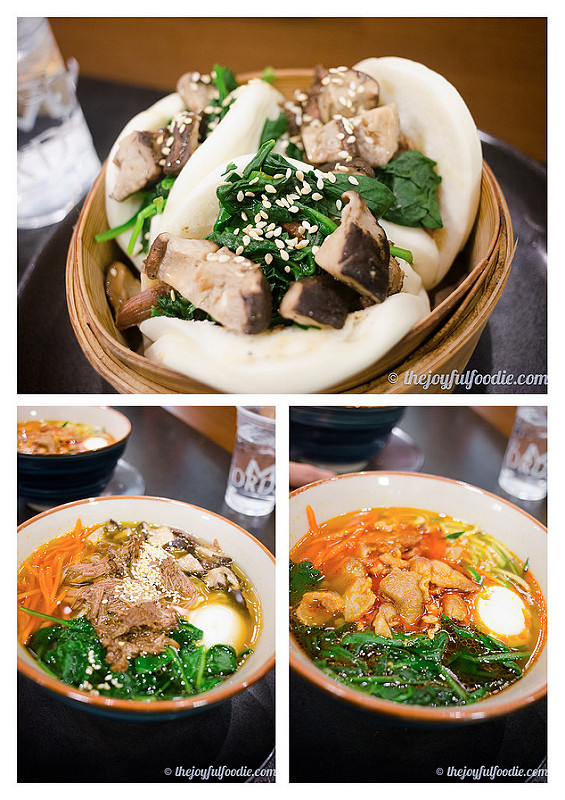 The menu basically has just two proteins – red chile pork and char sui beef. They pair them with ramen, rice or steamed buns. Same protein for either vehicle. There are vegetable steam buns for those who don’t eat meat.

This go around we had the Char Sui Beef Steamed Buns and one each of the pork and beef ramen bowls. The steamed buns were pretty tasty thanks to the szechuan glaze, but any component not drizzled with the sauce was fairly plain. All together, they were good, though. The buns were nice and fluffy, and all components were cooked perfectly.

The ramen bowls didn’t taste much like actual ramen, which I guess is to be expected, but they were pretty tasty bowls of soup. The ramen noodles had good, chewy texture, and the eggs were perfect. The pork was much softer and more flavorful than the beef. Aside from that and the chili oil in the pork soup, the bowls were basically the same.

Mini Foodie ate about half my bowl of ramen while Tiny Foodie went to town on her dad’s ramen and the steamed buns.

BUT you may notice that Mini Foodie is sitting in her stroller while Tiny Foodie is in Daddy’s lap. This place is small, which I guess is to be expected since it’s right in the middle of Nordstrom. A good amount of the seating is counter space, and the tables that they do have are mostly two tops.

I’d say it’s worth a try for the novelty and a nice bowl of soup with ramen noodles (not to be confused with actual ramen), but if you want ramen, I don’t think Raam will curb that craving.

Our next foodie mall find – Napoleon’s Macarons, and oh what a find it is. I had no idea they even opened up in the mall, but if I had I know I’d be wary of macarons sold in a mall. And at a kiosk at that. Luckily for me, the hubs bought a box of them while I was shopping. Perfectly crisp tops, soft chewy centers and filling that isn’t overly sweet. The one gripe I have is that I didn’t get to see the flavors that he chose. The green one below tasted a bit floral to me, but Aldwin swears it was just plain pistachio. And the one he claims was lavender tasted like blueberry. SO, I’ll get back to you on the accuracy of the flavors, but can we just take a moment to appreciate the fact that none of these macarons were hollow? NONE of them! I took a shot of the chocolate one (that obviously tasted like chocolate) above and the “pistachio” one below, and they were all like that. I cannot emphasize enough how amazed I was.

If you happen across Napoleon’s Macarons (they’re at Westfield Valley Fair for all my Bay Area peeps), try them out! And pick up a box for me while you’re at it.

Have you had any delicious food finds in unlikely places? How’s the mall food where you live?